YOU’LL BE AMAZED BY THE BIBBULMUN’S FLORA & FAUNA! 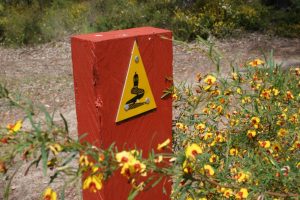 With such a diverse range of habitats across the trail, the Bibbulmun Track offers rich opportunities to discover a new world of flora and fauna, much of which only exists in this region.

Pig Face Like aloe vera, the leaves can be used for minor burns and stings. However, the leaves of pig face can also be eaten – they are perfect sliced thinly and blanched before cooling and adding to the salad beside some locally caught dhufish from Peaceful Bay. Some say they can be eaten raw, but they leave a floury taste in the mouth that I am not partial to. The pièce de résistance is the fruit, indeed, the Latin genus for the plant means ‘edible fruit’. Look for a smooth red swollen ‘double leaf’, pinch it off the stalk and squeeze the fruit into your mouth. Some eat it, skin and all, but I prefer it without the skin. Think ‘salty strawberry’. Just leave some for the native wildlife for nutrients and for natural plant dispersal.

Coastal Beard Heath Another tasty fruit found along the southern coastal section of the Bibbulmun is the coastal beard heath, named due to the ‘beard’ found on the white petals of the flowers. If you reverse your binoculars to the flower, it will magnify the petals to allow you to see the beard more easily. Fruiting at the onset of summer, they produce huge numbers of small white fruits that are loved by silver gulls and silver eyes. The pure white ones are the tastiest, resembling grapes in flavour. Sadly the pips are half the size of the fruit and can be annoying, but worth it in my opinion.

Karri Forests 180 million years ago the flowering plants started to dominate the world, overtaking the conifers and cycads as the dominant group of flora. The karri tree, the heart and soul of the Pemberton region and one of the most famous icons when people think of the Bibbulmun Track, is one of these flowering plants and a true giant. It may not be as tall as the mountain ash of southeastern Australia or the giant sequoia of North America, but these forest trees stretch 85m into the sky and easily make you feel small and insignificant. Take time to not just look up towards the canopy, but touch the bark, search for the woody fruit, crush and smell the freshly fallen leaves and look for white breasted robins and red eared finches in the tiny bushes at its feet.

Western Grey Kangaroos The iconic red kangaroo, found throughout the arid regions of Australia can do it. The eastern grey kangaroos found along the east coast of the country can do it, too. But why can’t the western grey? They evolved at around the same time, so why not? It is a question I am unable to answer, but what is it they can’t do? The answer is embryonic diapause. This is when a female kangaroo has a joey in the pouch. The joey is drinking milk, like all mammals. A month after he/she is born, the female kangaroo is able to fall pregnant again. When the second embryo gets the 80-100 cells, the embryo stops developing. It sits there waiting patiently for the time to come when the older joey begins weaning off milk. When this happens, the second embryo begins its development again.
Again, I ask, why does the western grey not do this when the red and eastern grey are able? Mother Nature has her plan, I suppose, and knows better than us.

Tracks and scat As you walk along the Bibbulmun Track, looking up at the karri trees and out to the vast vistas from Shelley Beach, check the trail itself. Search for the tracks of the locals that walk the Bibbulmun at night. The arcs of the monitor, the waddle of the echidna, the three prongs of the emu or the hilarious sharp multiple stabs of crabs. The macropod will be the most common and possibly the easiest to see and are always in pairs. They resemble two faceless clocks, just the hands, stating the time is 10.00 on the left and 2.00 on the right. They are, of course, the kangaroos and wallabies (there are many other animals that form these tracks as well, but these are the most commonly seen).
What amazes me is the fact that you only ever see two toes for each foot, when, like us, they have five toes. I will explain. Hold your hands in front of you, palm facing away. It is the pinky and the ring finger that you see, the ring finger being the print pointing to 12.00 on the clocks. The ‘thumb’ is present, but does not protrude and the other two digits have shrunk, joined together in one sheath of skin and used for grooming.