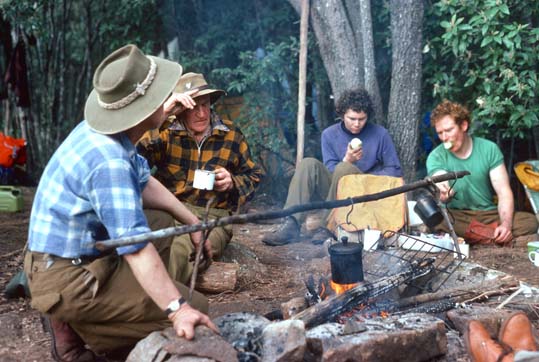 A sneak peek back into time of the Tasman trail construction

This story was shared by Daniel Dourneau who was quite stoked to find an article we had written on the volunteers from the Hobart Walking Club that first created bushwalking tracks in the Tasman Peninsula long before there was an official Three Capes Track walk. You can read the original article by clicking here.

Daniel tells us…
I have been a member of the Hobart Walking Club from 1974 to 1980 when I left Australia. Frank Morley was a very good friend of ours and during this period we put many man-days on the project of the track. It was quite a task with some times just a handful of people and other times more than twenty.

The schedule was to leave Hobart (Franklin Square) on the Saturday morning for a rather long drive down the peninsula. We used to stop at a small bakery along the road to have some sort of breakfast and order bread to be picked up on the return trip. In the beginning, we started from Waterfall Bay to reach the working site. Later on, as work progressed we were starting from Fortescue Bay. Just reaching the worksite was quite a challenge since we had to cart packs, tents, sleeping gear, food and water for a weekend and usually some tools that could not be left on site (chainsaws and petrol). Usually, by the time we reached the worksite and set up camp, it was almost time for a quick lunch before starting on the real work.

On Saturday afternoon, we used to put in a lot of work until late in the evening. After that, it was dinner and stories around the campfire. Back in those days, Jack Thwaites, one of the founders of the walking club was a regular participant to these working bees. We used to put more work in on the Sunday morning, packed everything and usually left the worksite by early to mid-afternoon. By the time we were reaching Hobart, it was usually quite late. Finally, one Sunday afternoon, we reached the junction point between the northern and the southern part of the track and declared it open. This was marked by a huge tree in which we cut the passage. I believe that it is, still there today.

With Frank we had many more activities in what we used to call track clearing. I also had the opportunity to work on the hut in Port Davey. We also did several Search and Rescue operations.

I still remember struggling through scrub, tea-tree and various local vegetation (maybe also some beautiful scoparia) on our way to Cape Hauy and Cape Pillar, with stupendous scenery! I also remember walking to Cape Raoul, it was tough 😉

Several years later I did a trek in Iceland with Frank, it was great. Unfortunately, that was the last time I met with Frank who had a fatal cardiac arrest in the bush.

Now my wife and I are retired in the Far South of Portugal enjoying a round the year pleasant weather.

Images dating back to 1977, during a track clearing week-end.
Main photo: To be noted that we have both Frank Morley (green t-shirt) and Jack Thwaites (about 80 years old at the time)

Thanks Daniel, so great to get a fascinating view of the hard work that went into creating this track that our clients get to experience on our 3 day walking adventure.