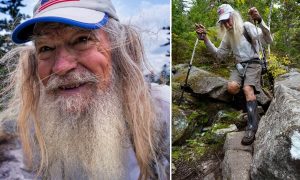 If you think you’re too old to go on a walking holiday then think again.

An 83-year-old from Alabama has shown that age has no barrier by becoming the oldest person to complete America’s iconic 3,500km Appalachian Trail!

M.J. “Sunny” Eberhart, known by the trail name “Nimblewill Nomad”, acknowledged that despite having tens of thousands of kays under his belt, the trail was tough going at his age, leading to quite a few spills on slippery rocks.

“I’ve a got a couple of skid marks on me, but I’m OK,” he said. “You’ve got to have an incredible resolve to do this.”

Eberhart hiked the trail out of order, in sections, to take advantage of optimal weather, and had already completed northern sections including Maine’s Mount Katahdin.

He completed his final section in western Massachusetts, in the town of Dalton, in the same year in which a 5-year-old became among the youngest to complete the feat!

So if you’re looking for any inspiration when deciding if you’re up for a Life’s An Adventure pack-free guided walk just think about “Nimblewill Nomad” and you’ll be right!