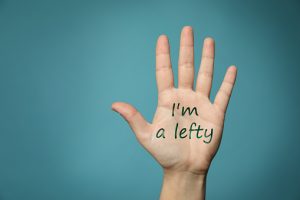 In a world first, National Parks NSW have announced that Wollemi NP, just beyond the Blue Mountains, is to be used exclusively by left-handed people.

This came about after sustained lobbying from the Australian Southpaws Society (ASS) who have argued for some time that bushwalks tend to favour the right-handed.

“If you go on a bushwalk in Australia you’ll find that walking trails have 67 percent more right turns than left,” says ASS spokesperson Victor Sponge. “It’s just not fair!”

“The main problem with this is left-handed people tend to lean to the left slightly and turning right requires a lot more effort.”

From now on all loop walks in Wollemi NP will have left hand turns exclusively and you’ll have to do a writing test to prove you are left-handed before entering the park.

“Victor and the others ASSes have been very vocal in the defense of the left-hander hiker,” National Parks NSW spokesperson Thelma Girdle told Life’s An Adventure. “In fact they wouldn’t stop contacting us. I found many ASSes waiting for me outside the front of my office – I even found two ASSes hiding in my hedge. Something had to give.”

The first left-hand hikers bushwalk is on today, April 1 – and every left-handed participant will get a free left handed water bottle.

Life’s An Adventure asked ASS if the ambidextrous were permitted into Wollemi NP. Victor Sponge just looked up into the sky longingly and said quietly to himself. “I’d give my right arm to be ambidextrous…”